Another nail in Redflex’s coffin. Or, at least, it should be. We shall see.

COLUMBUS, Ohio – State lawmakers effectively banned Red light cameras this year. They believed the cameras were about making money for cities and companies through fines. Columbus city leaders including Mayor Michael Coleman and Council President Andrew Ginther defended the red light cameras for saving lives. Documents obtained by 10 Investigates show how there was a lot of focus on money.

When attempting to convince Columbus not to switch vendors in 2009, Redflex said the risk of dumping them was a “huge opportunity cost for (the) city to risk upsetting a well-run and profitable program.”

The city also fought to keep their share of the fine money high, saying they needed it to buy patrol cars and fund programs.

These people are the worst.

I would like to see the Idaho Stop become part of the California vehicle code.  Idaho has had such a law since 1982, resulting in a decrease in bicycle collisions with cars causing injuries or deaths, according to some studies.  Right now, we have restrictive bike laws that are rarely enforced, which creates a terribly unsafe and unfair situation for cyclists.

It’s no secret we think automated enforcement is illegal and a corrupt manifestation of government overreach. We’ve been banging that drum since we started the Ticket Assassin back in 1998. So, it’s nice to get some vindication:

Finley, 55, of Cave Creek, pleaded guilty before U.S. Magistrate Judge Terence P. Kemp of the Southern District of Ohio to a charge of “conspiracy to commit federal programs bribery and honest services wire and mail fraud,” the U.S. Department of Justice announced this morning.

She obvious takeaway is that these red light camera ticket companies like Redflex are more corrupt than Florida Governor Rick Scott.

Don’t make fun of me for seeing this in Woman’s Day. It comes by way of a Google News Alert. Sheesh, you people. 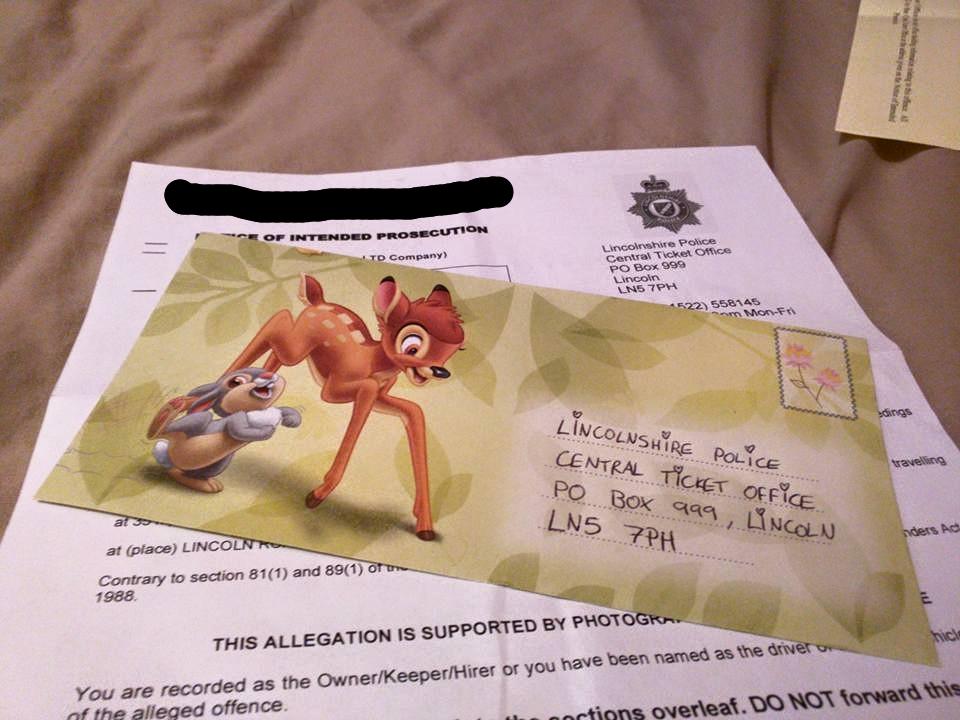 Nobody wants to receive a speeding ticket, but Reddit user CapnHammered managed to turn the experience into a very cute, instantly viral moment.

The driver was ordered to pay a fine after driving 35mph in a 30mph zone in Lincolnshire in England. (He lives near Birmingham, but he was visiting his girlfriend in the area.) Since letter writing is such a lost art these days, he didn’t have many envelope options to send in the fine.

What did he end up using? A colorful Disney envelope with the characters of Bambi and Thumper on it. Aww! To go along with the cute theme, he made sure his penmanship was equally sweet, and he drew hearts on top of each letter i. Nice touch!

Gotta hand it to Millbrae. They found just the right corner on which to stick a red light camera. The vast majority of motorists are getting beaned for legal right turns after a stop.

In one month alone, red light cameras in Millbrae generated over 1,500 citations in it’s nine year history. Three intersections in Millbrae have red light cameras and all of them are on Millbrae Avenue.  One camera captures drivers exiting southbound Highway 101 and is the most prolific, giving out 595 citations in the month of June.  Most of the citations were given to drivers who made a rolling right turn. “She just stopped and then she took a right, like you would normally do, yeah a simple right turn,” Alex Quant’s said.  Mike Miranda showed ABC7 News an expensive ticket he got for over $400.

If you click through to the story, you can watch the video. The unfairness of the ticket is obvious from Miranda’s face.  (Despite the unfairness of his ticket, The Ticket Assassin predicts Miranda will remain in the 98% of people who do not contest).

Here’s one part of the story that stood out to me:

The majority of citations were issued for right turns, instead of running red lights. 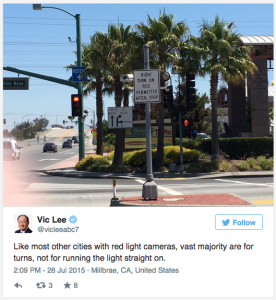 Red light cameras were sold to us as a check on drivers who blow through red lights. “Red light runners”, always with  descriptions of drivers flooring it on a yellow light to traverse straight through an intersection, often with descriptions of terrible T-bone accidents.  But that’s not what the “vast majority” of these tickets are actually for. The vast majority of right light camera tickets are for right turns after coming to a stop at the corner. I don’t think anybody would agree that is the same thing. I don’t think any rational, sane motorist would agree it’s as bad (or worse) as blowing straight through an intersection.

Congratulations, Millbrae! You got these cameras installed on a pretense of safety and are now soaking your citizens for technically-illegal but safe rolling-stops at the corner. Time to pop that champagne.

The story quoted our friend and “honorary” Ticket Assassin Jim Lissner at HighwayRobbery.Net:

According to statistics analyzed by HighwayRobber.Net, Millbrae had a record number of citations totaling 1,555 in June, which is more than any month since the cameras were installed in the city nine years ago. HighwayRobbery.Net is a blog that tracks red light cameras all over California and said about 90 percent of the citations are for turns mostly rolling rights, which are violations that cause the least number of collisions, but make the most amount of money in fines. “I personally think it’s legalized theft,” one man said.

Sen. Jerry Hill’s bill to reduce fines for rolling rights failed and said cities should not use the cameras to make money. “They look at every opportunity to increase revenue in situations where they’re not dangerous,” he said. The question is how much has the city made from the cameras and are there fewer collisions because of them.

That’s pretty easy. This intersection alone got 1,500 citations in June. The tickets issued are $400 a pop. That’s some fairly simple math.

Supervisor London Breed has come out as the first known elected official in San Francisco to publicly support a sensible change to California traffic law: allowing people on bikes to treat stop signs as yield signs.

“I think that’s how it should be,” she said, when asked if she supported San Francisco introducing Idaho-style rolling stops. “A bicycle is not a car, and they should be handled differently.”

Of rolling stops, she said, “On my bicycle, that’s what I do.”

I always suspected that red light cameras did nothing to increase traffic safety. Even the most optimistic stats showed single digit deceases in accidents often coupled by double digit increases in rear-end collisions. Why? Just because you decide to stop on yellow does not mean the Hummer behind you will. As a result, rear-end collisions have increased at intersections where red light cameras are installed.

Now there is evidence that ALL TYPES OF ACCIDENTS may increase when cameras are installed. In Stockton, California, accidents have increased by 8% at the majority of intersections with red light cameras. Over 15,000 citizens were cited at $338 each. This means that the city collected over $5,000,000 in fines to make its streets more dangerous. The city’s response to the obvious failure of their camera program : they are installing two more cameras. I hope the local trauma centers are well-funded and can handle the increased business.

This is some fucked-up shit:

Under California law, red light camera tickets may only be issued if the driver is clearly visible in the photograph. Positive identification is required because the driver, who may not be the registered owner, will have a point assessed against his license. MRCA decided it did not want to pay Redflex for verifying photographs of drivers and instead called the $175 citations “administrative penalties.” This arrangement allowed the agency to avoid splitting fine revenue with the state government. Motorist Danny Everett argued that was illegal.

Translation: the identity defense may be going away.

How this effects California motorists:  As it stands now, if you get your picture taken by one of those Orwellian cash machines, the state mails you the ticket. However, they only mail you the ticket if the photo of the driver is of decent quality – enough to be able to ID the driver. With this ruling, the court may feel empowered to chuck that standard right out the window.  Justice: defenestrated!