If you’ve been photographed by a red light camera, you will recognize the “information sheet” below, which is mailed with your citation. We found so many half-truths, false assumptions, and outright lies in this document, that we decided to deconstruct it and insert some truth. This handout smells more like “sheet” than information.

The word “violator” and “violation” are used throughout this notice. Nowhere is “alleged” added. The assumption here is clear: if the camera took your picture you must have broken the law.

Perhaps we should thank the architects of our new police state for removing that nagging right to be considered “innocent until proven guilty in a court of law” from our lexicon. By referring to defendants as “violators” as if they’ve already been found guilty, this fascistic use of technology attempts to unravel our right to due process in a single flash of light.

Running a red light is a traffic infraction, a minor criminal offense. Only people can commit crimes, not vehicles. Here we see one of the major obstacles to automated enforcement prosecution: the driver of the vehicle at the time of the alleged violation is never positively identified .

In traffic stops, the police positively identify the alleged violator by checking his driver’s license and having him sign the ticket. By signing the citation, the cited motorist promises to appear at the date and time specified on the ticket. Failure to honor this signed promise can result in a “failure to appear,” a misdemeanor offense that may result in additional fines and a license suspension.

In automated red light tickets, the driver of the vehicle at the time of the violation is never identified. The registered owner of the car is cited as if he or she was the driver, but there is no way to prove this for a fact. Since there is no signed promise to appear and no positive identification of the driver, attempts to convict the registered owner for a violation he may not have committed are legally difficult. Owners who ignore these citations are usually threatened with a collection action but seldom with any legal action.

If you pay the bail, the court assumes that you were driver at the time of the alleged violation. By paying, you verify their guess that you were the driver they photographed. When you answer this notice by paying the bail, their speculation now becomes a fact: you have admitted being the driver and are subject to a $346 fine and having a conviction recorded on your DMV record for five years.

If you decide to be honest and essentially self-incriminate by paying the bail, you can still keep the citation off your driving record by attending traffic school. When you complete traffic school, the court will dismiss you citation, saving you about $1000 in insurance increases over the next five years.

This is where you are coerced to rat out your dad, brother, sister, spouse or best friend who was driving the car at the time of the alleged violation. You are being asked here to betray a loved one so that the state government and Lockheed Martin can get rich. If the government can intimidate you into turning in your own family over an alleged traffic violation, they can probably make you do anything.

Given the number of people who routinely drive your car (family, friends, valets, mechanics) it should be no surprise if you cannot say for sure who had your car at a particular date and time.

To avoid a court appearance, you can also plead not guilty via mail. To view an example of a Written Declaration for an automated enforcement citation in which you were not the driver, visit our shareware page.

A court appearance can very often result in a fine reduction. Judges have wide discretion in these cases. One judge in San Diego routinely reduces the automated enforcement citation fines from $346 to $130.

Once you call or write the court, they will know that you received the citation and they will expect you to appear to answer the charge or pay up.

Scheduling an appointment to view a color version of the photo is a massive waste of time. The “traffic violations bureau” is just a front for Lockheed Martin. Even if the photographed driver is clearly not you, the “bureau” will still direct you to appear in court. They hope that the court will intimidate you into providing information about the photographed driver (i.e. they hope the court can scare you into ratting out your Mom). 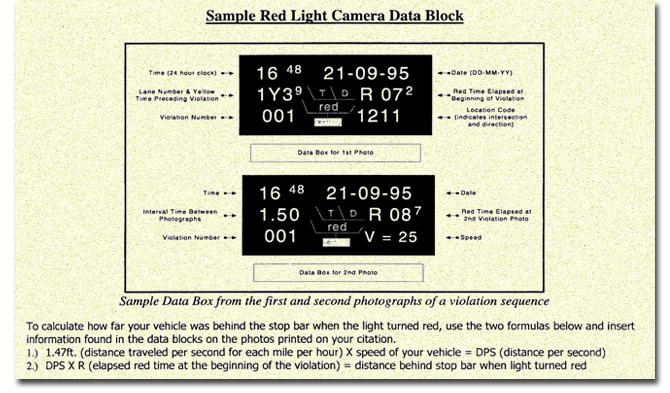 Where’s Stephen Hawking when you really need him. Do you understand any of this technical nonsense? No? Good! You are not supposed to. Are you confused, befuddled, dispirited? Has your brain shut down as it did in 10th grade algebra class? Good! That’s the point. They hope you’ll be so confused by this misleading jargon that you give up and pay.

Even the sample data boxes here are misleading. Look at the first data box. The red time elapsed at the beginning of the violation reads “R 072.” That would be 7.2 seconds. If you entered an intersection 7.2 seconds after the light turned red you would probably be killed in a horrific wreck.

Why does Lockheed provide such an absurdly long time in their sample when the actual times recorded are usually no longer than 1.5 seconds and can be as low as .2 seconds? They do this to confuse you. If you compared the time in your citation photo boxes to their sample box, your times would not make any sense. You might then incorrectly interpret your time of R 002 as two seconds instead of only two-tenths of a second. The less you understand about this data, the better chance they have of you paying a $346 fine without disputing their version of events.

Lockheed Martin provides just enough information here to confuse you but not enough to illuminate exactly how all these formulas and data apply to your case. If you did understand how to use this information, and you were alleged to have been in red for a second or less in the first picture (1st data box) you might be able to prove that you were crossing the limit line on yellow and therefore not in violation

Our document library provides a fully “proofed” calculation of the data box information for an automated enforcement citation. It also has a blank calculation sheet that you can employ to correctly calculate your position in the intersection at the time of the first photo.

The San Diego Police Department and City of San Diego have not installed any Red Light Cameras. However, Lockheed Martin IMS, a defense contractor turned corporate privateer, has installed sixteen of these cameras in San Diego and will install an additional sixteen by the end of this year. Their expertise in spying on the Soviets is now being turned inward on the citizens of our fair state. The “enhanced” red light fine of $346 contains a $148 bounty that Lockheed splits with the City of San Diego.

Supporters of automated enforcement claim that their revenue cyborgs are popular with the public. If they are so popular, why are they housed in bullet-resistant casings? I’m not nearly as popular as they claim these machines are, but I’m not worried about people shooting at me.

If automated enforcement is so accurate, why are two technicians needed to interpret the information? It’s probably because the raw data does not necessarily prove that you ran a red light. The data still has to be interpreted by technicians, technicians whose employer is only paid if you are determined to be “guilty.” These technicians are never present at trial for you to cross examine. The right to cross examine witnesses against you is fundamental to due process but denied in automated enforcement cases.

Again, the rhetoric here refers to the cited motorist as a “violator,” not as an alleged violator. Guilt or innocence is supposed to be determined in court as a process of law, not in advance of any hearing, as the rhetoric here implies. In automated enforcement cases, once an anonymous corporate technician decides you’re guilty, and a police officer rubber-stamps this determination by signing the citation, you are well on your way to being railroaded.

In reality, the citation is not being mailed to a “violator” or even an “alleged violator” but to the registered owner of the vehicle. The ultimate weakness of automated enforcement is that you are never properly identified or made to sign a promise to appear in court, as you are when cited by a police officer. The government’s ability to punish those who completely ignore their automated citations is severely limited by this fact.